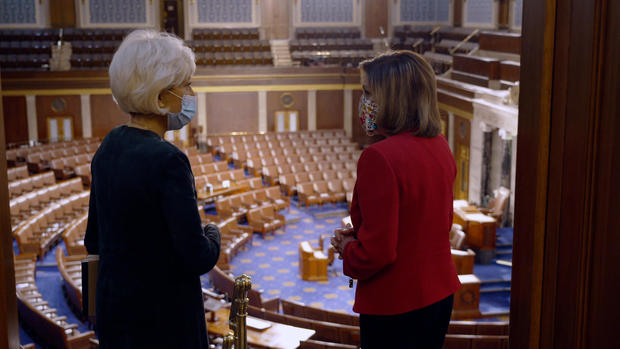 Speaker of the House Nancy Pelosi got emotional in an appearance on 60 Minutes Sunday, telling CBS’ Lesley Stahl about her experiences during the Capitol riots, walking through where her office was ransacked and her staffers hid under a table for hours.

In the interview, filmed on Friday, Pelosi described how when the rioters first breached the Capitol’s exterior doors, the Capitol Police pulled her from the podium and insisted that she leave with them to a safe, undisclosed location. At first, she did not want to leave, but they insisted it was necessary.

“What happened was a terrible, terrible violation,” Pelosi said, fighting back tears and telling Stahl how the rioters had broken down the door — “they broke that down, they smashed it in” — to the Speaker’s suite of offices.

“The staff went under the table, barricaded the door, turned out the lights, and were silent in the dark,” said Pelosi, “under the table for two and a half hours.”

One staffer recorded the noise of the rioters banging on the door outside as they waited behind it.

The rioters fortunately did not get into the area where Pelosi’s staffers were hiding, but they did break into her private office, where they broke a mirror, stole a laptop and other property, committed acts of vandalism, and, at least one man who posed for a a now-viral photo with his feet on Pelosi’s desk (a photo that directly led to his arrest a few days later).

“They were coming to find you,” Stahl said, “maybe to hurt you, I don’t know.”

“The evidence is now that– that it was a well-planned, organized group with leadership and guidance and direction,” Pelosi concurred. “And the direction was to go get people. They were vocally saying, ‘Where’s the Speaker? We know she has staff. They’re here someplace. We’re gonna find them.’”

Watch the video clips above, via CBS.

34 Things Thatll Help You Improve Your Time In The Kitchen

Giuliani Claims He’s Involved in Trump Impeachment Defense, Not Ruling Out Letting Him Testify at Trial

England close in on win over Sri Lanka

A vice president like no other: Harris steps into VP role with unique strengths ​​​​​​​– and unique challenges