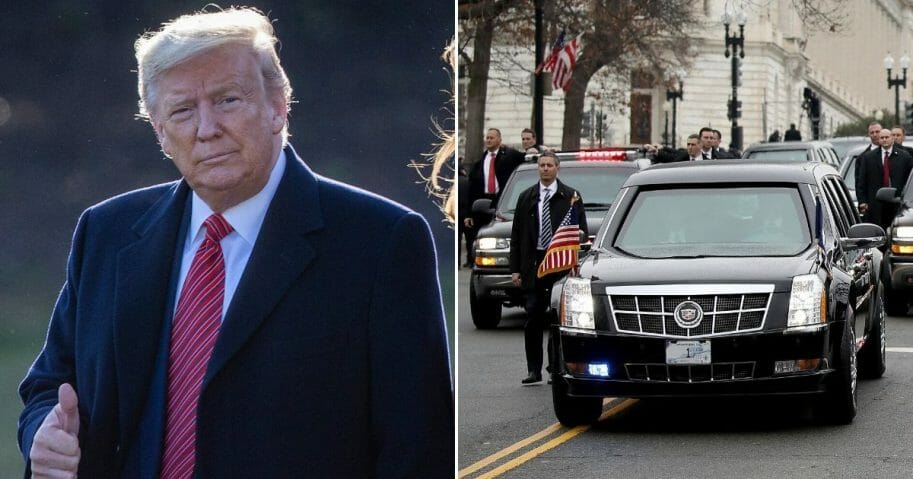 President Donald Trump may give Sunday’s Daytona 500 crowd a unique spectacle, according to a new report.

But there could be more.

Fox News chief White House correspondent John Roberts tweeted that Trump may go for a ride around the famed oval in the presidential limousine, nicknamed “The Beast.”

“SCOOP: Multiple Sources tell @FoxNews that @realDonaldTrump is planning to take a lap at the @DISupdates Daytona International Speedway in the “Beast” presidential limo ahead of the Daytona 500. It’s not 100%, but that is the plan at the moment,” Roberts tweeted.

SCOOP: Multiple Sources tell @FoxNews that @realDonaldTrump is planning to take a lap at the @DISupdates Daytona International Speedway in the “Beast” presidential limo ahead of the Daytona 500. It’s not 100%, but that is the plan at the moment.

“The Beast,” which is similar in appearance to a Cadillac XT6, weighs about 10 tons and is designed to offer Trump maximum protection from any assassination threat, according to the Washington Examiner.

What a way to start The Great American Race! 🏎🏁https://t.co/uXDtBOuObp

“The leader of our country is coming to the Daytona 500. How cool is that?” Cup Series champion Joey Logano said, according to The Associated Press.

“That kind of solidifies what our sport is. It’s a huge event. We’re a big sport, and to be able to have the president come here, that’s something we all should be proud of. Whether you support him or not, it doesn’t matter. It shows the unity in our sport and how big our sport really is,” he said.

Trump on Friday tweeted his anticipation at being part of the race.

I look forward to attending the Daytona 500 on Sunday with lots of my great friends from Florida, including the France family and @RepMichaelWaltz from #FL6. See you there, good luck to everyone! @NASCAR @SenRickScott @marcorubio @GovRonDeSantis https://t.co/e0SUl4GfBm

“We’re a different group of people,” said Georgia native Scott Gregory, attending his fifth straight Daytona 500. “When you walk around and talk to all these folks, we’re all pretty much of the same mind of what we think of the U.S., leadership, our president, and we’re all pretty much in line as far as that thinking. I don’t think it’s true of other sporting events.”

“The Daytona 500 is one of the greatest events in sports and the prestigious season-opening event to the NASCAR Cup Series,” track president Chip Wile said in a statement on NASCAR’s website.

“Daytona International Speedway has been privileged to have hosted several sitting Presidents of the United States over our history. We’re honored that the President of the United States has chosen to experience the pageantry and excitement of ‘The Great American Race’ by attending Sunday’s 62nd annual Daytona 500.”

Trump’s name was also on the track Saturday.

Joe Nemechek drove a Mike Harmon Racing car NASCAR Xfinity Series that was sponsored by the Patriots PAC of America, and sported Trump/Pence 2020 logos on it.

The AP reported that the Daytona 500 will be run before a sellout crowd for the fifth consecutive year.

We are committed to truth and accuracy in all of our journalism. Read our editorial standards.