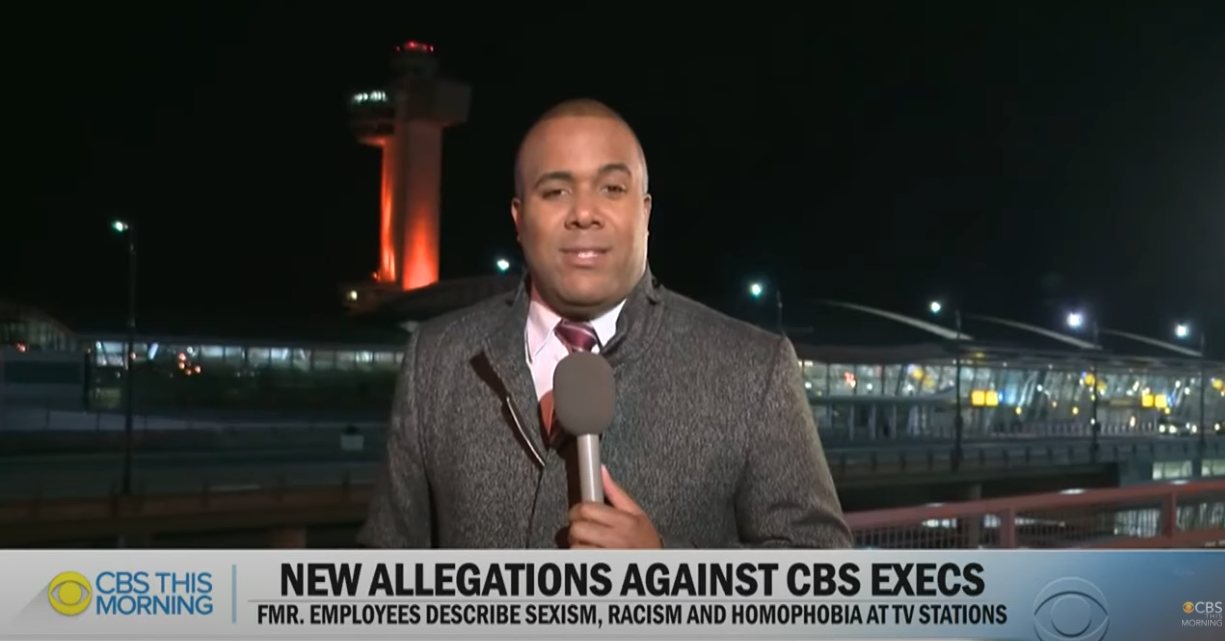 In a social media post Tuesday, journalist Don Champion, who was a freelancer for WCBS in New York in 2013 and 2014, detailed the ways in which he was “bullied and discriminated against for being a gay Black man” while reporting for the affiliate.

I keep “Former CBS News Correspondent” in my bio because I’m proud of what I accomplished. But the truth is working there was incredibly difficult and painful. Given the events of this week- I want to share my WCBS-TV/CBS News story. https://t.co/Uqs1Tzwbhu

Specifically, Champion was “warned” to “be careful, you’re gay, Black and a man. David [Friend] doesn’t like any of those.” Champion said he was often criticized in coded language for being “too gay,” and faced similar discrimination after moving to CBS Newspath, the network’s affiliate news service.

CBS This Morning’s Jericka Duncan spoke with Champion for a segment Wednesday.

There are new allegations of racist, sexist & homophobic behavior against 2 longtime CBS execs who oversee their local stations. @JerickaDuncan spoke to Don Champion, a former freelance reporter at WCBS, who said he was “bullied & discriminated against for being a gay Black man.” pic.twitter.com/7j1LDSFem5

“I can’t say enough how much fear you live in when you’re in this situation,” Champion told Duncan. “Whether I was able to make rent or eat that month was depending on how David felt about me. I was just trying to endure it and survive.”

“I have watched from the outside the changes at the network level and I certainly applaud that,” Champion added. “But everyone in the TV business knows that from the local news level, this was a reckoning that needed to happen.”

Duncan also spoke with Margaret Cronan, former news director at KYW. She said Friend, her boss at the time, didn’t use explicit racist language, but that he blocked her efforts to hire Black journalists at the station.

Friend told CBS that Champion’s accusations are “based on nothing but conjecture,” and that his “critiques of Mr. Champion were always based on performance … and had nothing to do with race, gender, or sexual orientation.”

Champion acknowledged that he had been offered a job at WCBS in 2019, which he declined.

Whew reading what you went through makes me so angry. Thank you for being so candid—that it pushed you out of tv news shows the depths of how bad it was. Thank you for sharing

Thank you for sharing. There are a lot of us suffering inside and the time to speak up for ourselves is beyond overdue…your strength is inspiring and I pray managers start changing their act because there are so many of us that are tired and have simply had enough.

Thanks for sharing this Don. I’m so sorry this happened to you. NO ONE deserves the treatment you sustained during your time at CBS. NO ONE. You should be proud of how hard you worked… always. We can all hope that CBS/Viacom do the right thing.

I worked briefly at CBS NY to try it out. I saw so many amazing, kind and professional people laboring under the tantrums of an unstable, toxic, mean and unprofessional man. I felt extremely lucky to have better options. You are lucky too. Life is too short for that misery.

In a statement Monday, CBS confirmed that Dunn and Friend “have been placed on administrative leave, pending the results of a third-party investigation into issues that include those raised in (the) recent Los Angeles Times report.”

According to the LA Times report, published Monday, Dunn had reportedly used disparaging language in referring to Black employees at KYW, the CBS station in Philadelphia. Dunn allegedly referred to popular longtime anchor Ukee Washington, who is Black, as “just a jive guy,” and also refused to extend the contract for Rahel Solomon, another Black anchor at KYW, reportedly saying in a phone call “I hate her face.”

In a statement, CBS told the LA Times that it had previously investigated Dunn in 2019, but “senior management at the time addressed the situation with Mr. Dunn, and the company has not received any complaints about his conduct during the period since then.”

In 2018, CBS faced a reckoning at the network level when then-network chief Les Moonves left the company under a cloud of sexual misconduct allegations.