Trump has repeatedly warned that if he were to lose the 2020 election, the economy and stock market would crash. But Wall Street analysts have dismissed his claims and the major indexes have risen even as Biden has held strong polling leads all through the past summer. (In early 2019, Trump also threatened that the stock market would tank based solely on the prospect of House Democrats’ impeaching him, which they eventually did over his Ukraine misconduct later that year, with no effect o the market.)

“What do you think a Biden presidency would mean, first, as our nation, our soul, but also from the point of view as business and Wall Street?” Obeidallah asked.

“It would be a restoration of normalcy and, as a Republican, I hate saying this, but if you analyze the last six administrations, the stock market and the economy do better under Democratic administrations,” Scaramucci accurately pointed out.

In fact, as this Bloomberg analysis found, Trump would’ve ranked near the bottom of the list of president in the past 60 years in terms of GDP, even before the brunt of the coronavirus pandemic hit.

By this measure, economic growth under Trump before the pandemic ranks toward the back of the pack, ninth out of the past 12 presidents, 0.04 percentage points behind Dwight Eisenhower and 0.08 ahead of Trump’s predecessor Barack Obama. Throw in the first quarter of this year with its first hints of pandemic damage — a level of economic bad luck encountered by lots of other presidents — and Trump falls to 10th, behind Obama. 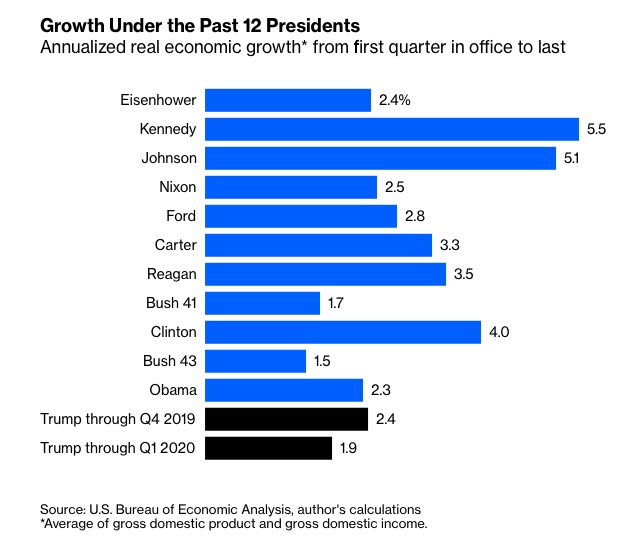 “If you just look at it from the Stock Trade Almanac, GDP, and unemployment,” Scaramucci added, “they shake out better for the Democrats. so, I think [Biden] will be fine, I think he’ll do a good job, he’ll restore normalcy, he’ll try to restore the rule of law.

Emmys 2020: The best and worst moments on a weird, virtual night, from Friends reunion to hazmat suits

Kominers’s Conundrums: A Nobel by Any Other Name

‘Nomadland’ Wins Toronto Prize, Putting It on Path to Oscars

16 Movie Characters Who Were So Bad, They Should Have Been Killed Off Entirely

14 Super Awkward Moments From The Emmys