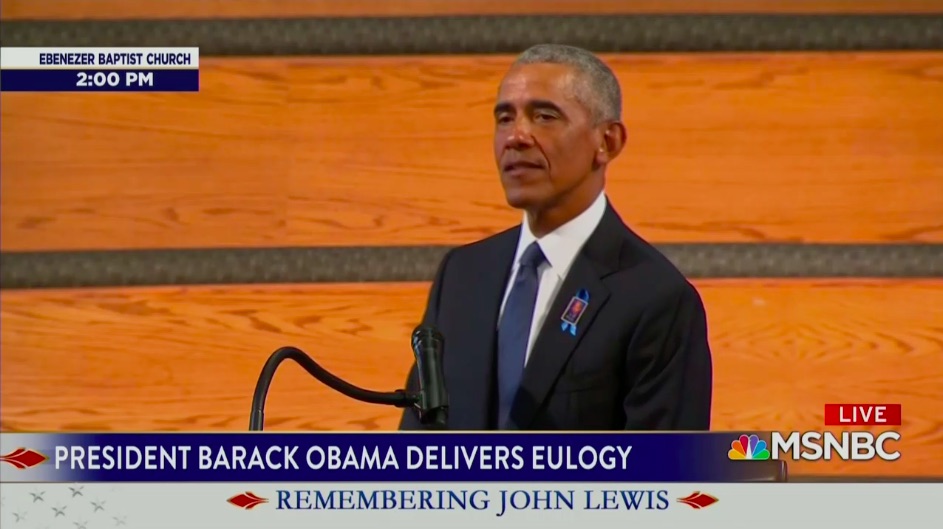 MSNBC and CNN split total day ratings wins in overall and A25 – 54 viewers, respectively, on Thursday with audiences tuning in to watch the coverage of civil rights icon Rep. John Lewis’ funeral. Fox News’ numbers were down 75 percent in the demo during the afternoon hours as it broadcast the funeral coverage.

CNN’s best hour of programming for the entire day in the demo came in the 2:00 p.m. hour, during former President Barack Obama’s eulogy, with 479,000 viewers watching in the demo. That hour also came in fourth overall in cable news on Thursday in the demo, trailing only Fox News’ three primetime programs. Fox News’ ratings noticeably dropped during its coverage of the funeral, with its numbers falling to 81,000 A25 – 54 viewers during the 1:00 p.m. hour and 95,000 at 2:00 p.m. as Obama gave his remarks.

During the increasingly competitive 7:00 p.m time-slot, MSNBC’s new entrant, The ReidOut won overall viewers on Thursday with 2.25 million and squeaking by Fox News for second place in the demo with 356,000 viewers. Fox’s The Story with Martha MacCallum came in third in the demo with 348,000 viewers and second overall, falling just short of MSNBC with 2.13 million viewers. CNN handily took first in A25 – 54 viewers with 434,000 but was third with 1.56 million overall.

Dems, White House optimistic stimulus deal could be reached this week after both sides make concessions

Donald Trump whipped out the charts to make his case about coronavirus. They didnt help him get around reporter Jonathan Swan

23 Tweets About Jonathon Swan Vs. Trump Which Prove That Aussies Take No Bullshit

How Do You Think These Popular Names Should Be Spelled?