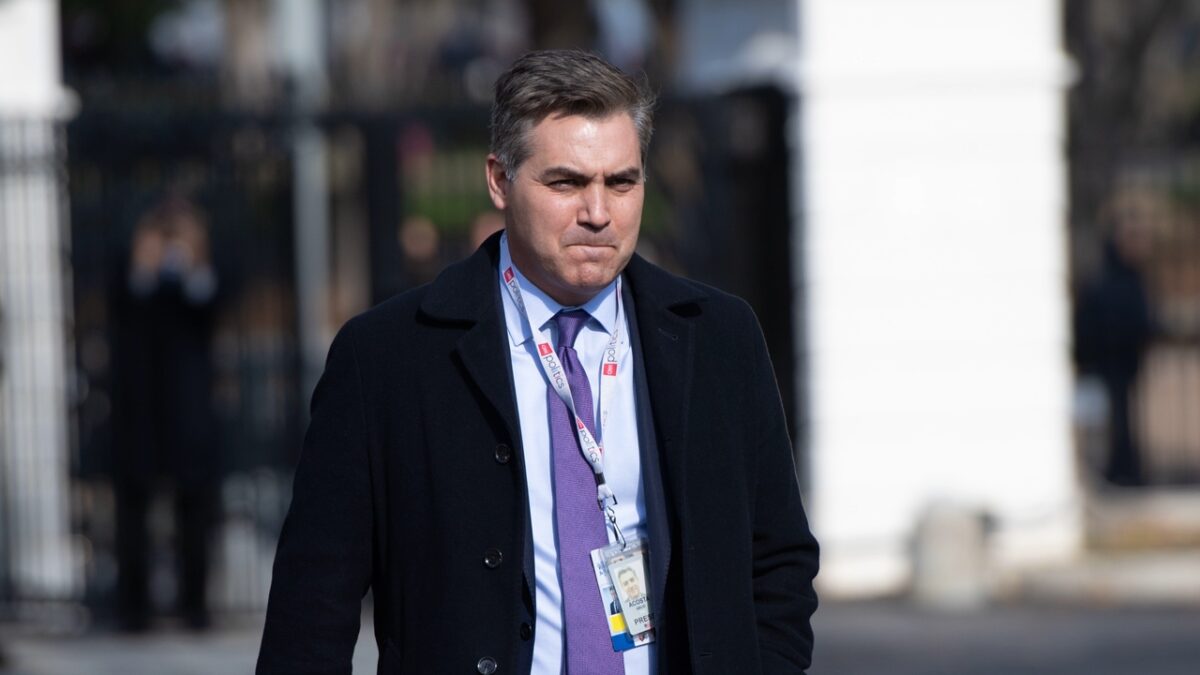 Fox & Friends host and de facto Doocy family member Brian Kilmeade argued recently that the younger Doocy is superior to Acosta because “he is not looking to get famous” and “He asks direct questions but is he polite,” in supposed contrast to Acosta, and papa Steve Doocy agreed that Peter doesn’t ask “gotcha questions.”

Even this superficial similarity is deceptive, as are many others.

Doocy has quickly established himself as a foil for President Joe Biden, a dynamic that extends back to the campaign. Biden has been a willing participant, trolling Doocy in sometimes brutal fashion.

And like Acosta’s dynamic with Trump, Biden’s interplay with Doocy is also informed by the baggage of Doocy’s outlet, Fox News — but only partially. While Biden’s jabs have recently come in response to relatively anodyne questions, there are substantive reasons for the president to lash out at The Dooce.

Leaving aside his coverage during the campaign, Doocy’s first week on the job during the new administration has produced a string of agenda-driven questions rife with misinformation.

His very first act was to ask White House Press Secretary Jen Psaki if the president thinks that Trump’s incitement of a deadly insurrection should go unpunished, and he did so using the right-wing framing that holding Trump accountable is somehow contradictory to Biden’s message of unity — as if all decent Americans aren’t unified against insurrection, to paraphrase Elizabeth Warren. That’s not a straight question, it’s messaging — and it’s very harmful, dishonest messaging.

So was his question about Biden’s remark that “there’s nothing we can do to change the trajectory of the pandemic in the next several months,” the context of which was the need for economic relief because the effects of the pandemic — evictions and foreclosures — will continue during that timeframe. Doocy used the quote to falsely suggest that the remark was in conflict with Biden’s promise to “shut down the virus.”

Tough and adversarial framing is often necessary for a reporter to cut through spin and talking points, but in both of these cases, to varying degrees, the dishonesty was naked and the intent was clear.

If you want to argue that framing — even dangerous and nakedly opinionated framing — is fair game, consider Doocy’s young record of misleading statements and falsehoods as a White House correspondent. He falsely alleged in one question that President Biden had called Trump’s travel bans “xenophobic,” and was corrected in far too gentle a fashion by Psaki.

He put forth a lie about the contents of President Biden’s executive order on mask-wearing, part of a consistent theme of Fox News’ to undermine life-saving Covid precautions.

To add insult to injury, Biden and his team have not been that effective in quashing Doocy’s misinformation. Yes, they probably have more important things to do than prep for every possible falsehood that can be thrown at them, and the risk of a declarative rebuttal that turns out not to be accurate is daunting, but it’s a worthy project. Perhaps Psaki could institute a “Doocy Delay” to double-check the content of his questions.

Doocy is not without skill. When he got video of then-candidate Biden riding his bike in Delaware — an immensely helpful bit of earned media for the campaign that had been beset by smears and misinformation about the candidate’s health and location — he was the only member of the press pool to do so. He has a talent for putting himself in a position to get a question in, and his questioning style is designed to bury any hint of malice.

But he’s cut from a different cloth than Fox News White House correspondents of the past, who by and large jealously guarded their appearance of objectivity, and left it to their network — often to their own consternation — to manipulate the results. You’ll find scant liberal dossiers on people like Major Garrett, Wendell Goler, John Roberts.

There’s also a key difference between Doocy’s baggage and Acosta’s. Doocy works for a network that has consistently promoted lies and misinformation about the coronavirus pandemic and the 2020 election, to name just the two categories with the deadliest consequences. Doocy is a participant.

Jim Acosta, by contrast, works for a network that was the subject of routine and repeated attacks from the then-sitting president, attacks that routinely rose to incitement and resulted in, among other things, a series of pipe bomb attacks.

And Acosta himself was the subject of repeated and unprecedented attacks by the sitting president, as well as a campaign by the White House press shop to get him banned from the briefing room that included the release of a doctored video.

Now, there are others who have criticized Mr. Acosta for what they see as an ostentatiously adversarial style, among them his colleague Jon Karl. But Karl would go on to tell Mediaite that the critics turned out to be wrong.

“I think that events that have played out since those early days of the Trump White House have in some ways vindicated Jim Acosta. I think that Jim was right to be outraged that the president was declaring a free press an enemy of the people,” Karl said.

Kilmeade and Doocy and the others who are comparing Acosta unfavorably to Doocy have similar complaints about style, but notice that none of them had a word to say about the accuracy of his questions.

For example, the exchange that resulted in the temporary suspension of Acosta’s credentials was about Trump’s repeated claims of a migrant “invasion,” which Acosta identified as false, and asked if Trump was “demonizing” immigrants.

Even Trump didn’t try to argue the facts, telling Acosta “I consider it an invasion.”

Now, you can wrong your hands about whether it’s “objective” enough for a reporter to use such a line of questioning if there was some way Acosta could have appeared more neutral. But less than a year later, a mass-murdering terrorist killed 23 people in El Paso, Texas using much the same language that Trump had.

It’s true that Trump’s presidency elevated Jim Acosta’s profile, but it’s because Acosta was one of the few White House reporters who met the moment, who stood up to Trump, who called out the threat that he clearly was all along. And when the White House simply stopped calling on him, Acosta became a sounding board for Trump officials too cowardly to speak publicly. He adapted.

Given the hundreds of thousands of Americans who have died and the continuing threat of insurrectionist terrorism, I would venture to guess that if he had his way, Jim Acosta would much prefer there had never been a need for a first Jim Acosta. Thus far in the new administration, there’s no indication we need a new one.

This is an opinion piece. The views expressed in this article are those of just the author.