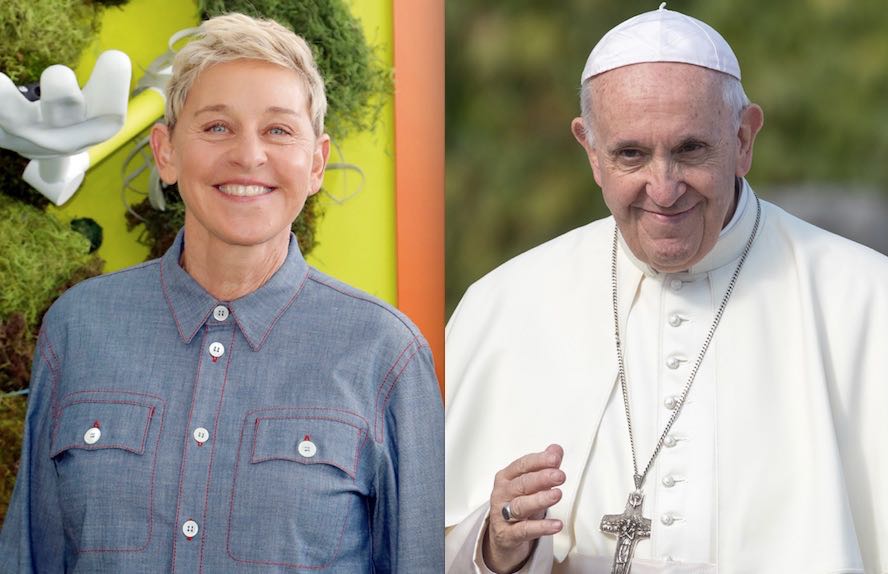 Ellen DeGeneres applauded Pope Francis on Wednesday following the news that the leader of the Catholic Church supports civil unions for same-sex couples.

“Thank you, Pope Francis, for seeing love for what it is,” the talk show host tweeted in reaction to the pope’s groundbreaking endorsement.

Thank you, Pope Francis, for seeing love for what it is.

As we posted about earlier on Wednesday, Pope Francis broke with doctrine from the Vatican – which is against same-sex marriage – in a new documentary about his life, titled Francesco.

The Catholic leader says in the film, “Homosexuals have a right to be a part of the family. They’re children of God and have a right to a family. Nobody should be thrown out, or be made miserable because of it. What we have to create is a civil union law. That way they are legally covered. I stood up for that.”

DeGeneres married actress Portia de Rossi in 2008 after the same-sex marriage ban in California was overturned. She’s one of the most famous gay entertainers in show business, officially coming out in Time magazine in April 1997, with a cover story emblazoned with the the words “Yep, I’m Gay.” That same month, DeGeneres’ character on her sitcom Ellen also came out of the closet, marking one of the most historic episodes in sitcom history.

Actress Kerry Washington also applauded Pope Francis’ remarks. “From one Pope to another…” she tweeted, in reference to her character Olivia Pope from the TV series Scandal, along with a series of clapping hands emojis. She included a gif of her character doing a celebratory dance.

There were additional favorable responses from politicians and media figures on Twitter.

As a Catholic, I’m pleased Pope Francis is pushing the Church into the 21st Century.

A reminder of what Jesus said about homosexuals: “ “.

It was human irrationality & ignorance that led to discrimination against LGBTQ, not the Gospels, which talked about love. https://t.co/54FDbVqTRm

Wow! As a Catholic, this makes me very happy. Well done @Pontifex 👏👏👏 https://t.co/rKUg4EP0mx

This is important. While a civil union is not a marriage, the Pope’s endorsement puts some shade on the underlying teaching of the church on marriage as it also creates an expanded view of the “family”. How will the Conferences of Catholic Bishops respond?https://t.co/mqAUwKdEpp

I knew I liked this Pope. This took a lot of courage and I am sure there are political knives out for him in the Vatican. This is a true act of Christian compassion and an example for all Christians not just Catholics. https://t.co/cSmXuN13Ke

This is a step in the right direction. https://t.co/whqq0DtF6Y

In a world that cries out for voices of moral authority, Pope Francis is among a very small number who really stand out.