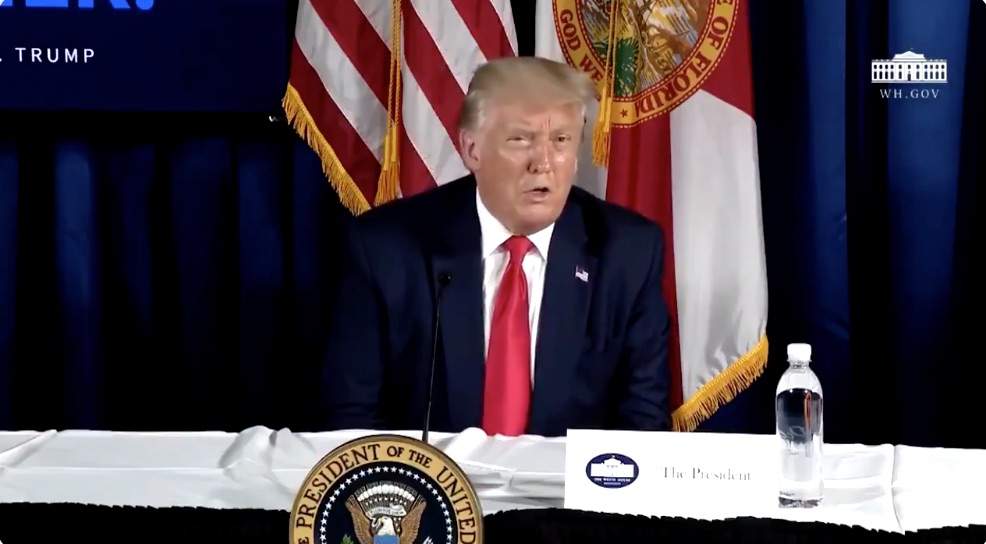 During a Covid-19 and hurricane preparedness roundtable in Florida, President Donald Trump brusquely dismissed as “another Russia hoax” recent U.S. intelligence reports that the Russian government was paying bounties to the Taliban for killing U.S. soldiers in Afghanistan.

Last month, the New York Times reported a blockbuster story that those intel reports had been included in Trump’s Presidential Daily Brief (PDB) in February. On Wednesday, Axios’ Jonathan Swan conducted a devastatingly thorough interview with Trump, during which the president ultimately acknowledged that he has never raised the issue of Russian interference in the US-Afghanistan War despite numerous phone calls with Russian President Vladimir Putin in the past few months. Trump’s defense of his refusal to confront Putin included claims that “it was never brought to my attention” as well as, some media figures pointed out, what amounted to repeating Kremlin talking points.

On Friday, a reporter pressed Trump about the fact that the intel reports about the bounty programs had been considered serious enough to be included in his PDB. “Have you been reading that daily briefing?” Trump was asked.

In his response, Trump claimed that he reads the PDB all the time, but then refused to specifically acknowledge if he ever read the intel about the Russian bounty reports. Instead, he repeated his previous, vague defense that “it was never brought to my attention” and then quickly added “I think it’s another Russia hoax” without elaborating.

“They’ve been giving the Russia hoax, shifty Schiff and all these characters, from the day I got here,” Trump said. “But it was never brought to my attention because it didn’t reach the level, there were a lot of people, including Democrats, that said it never took place. If it did take place, it would’ve been brought to my attention and I would take very strong action, there’s been nobody tougher with Russia or China than I have. Not even by a long shot.”

How can a traveller fly from Kabul to Sydney and into Queensland with coronavirus — and avoid quarantine?