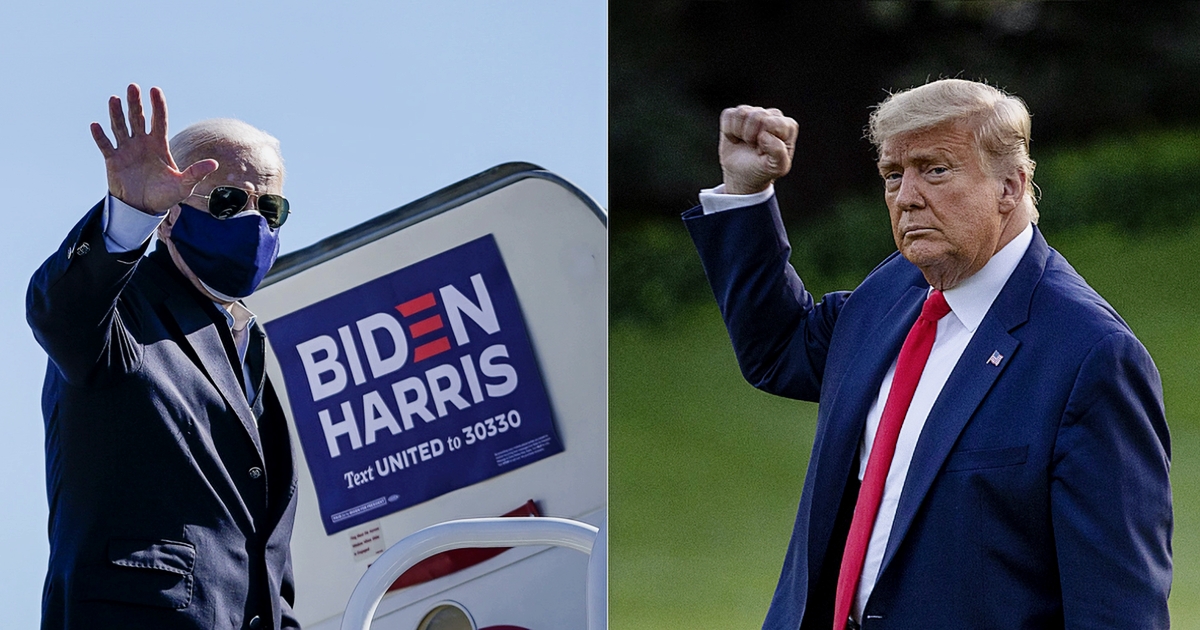 It’s important to understand that the FiveThirtyEight and RealClearPolitics polling averages, the leading aggregates of polls, are very different from each other.

RCP calculates its average by looking back at the previous two weeks of qualifying polls, and producing a raw, unweighted average.

This has advantages and disadvantages. For example, Biden’s lead over Trump sits at 7.9 percent in the RCP average, a drop of nearly a point (.7%) since yesterday, but that’s largely a function of the inclusion of a new polls from Investor’s Business Daily and Rasmussen that shows Biden with a 2-and 3 point leads, respectively — which appear to be outliers — coupled with more favorable polls aging out of the average. 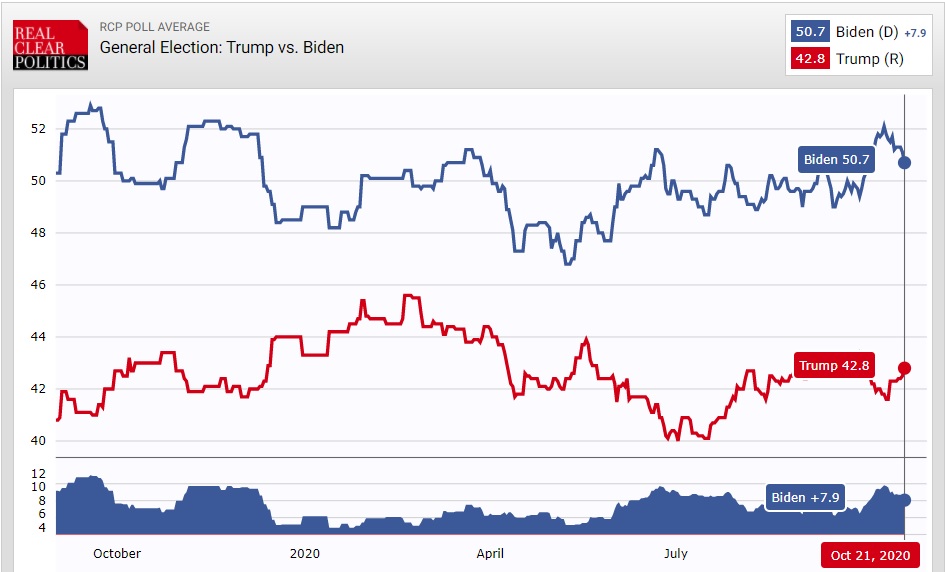 RCP also favors the use of polls that use a “likely voter” model, which sometimes tend to favor Trump.

The FiveThirtyEight average uses a more complicated formula that weights results based on the pollster ratings, sample sizes, and state polling results, which produces a much more stable average that theoretically gauges public opinion more completely.

In that average, Biden holds a commanding 10.1-point lead, down a tick from 10.3 points yesterday. 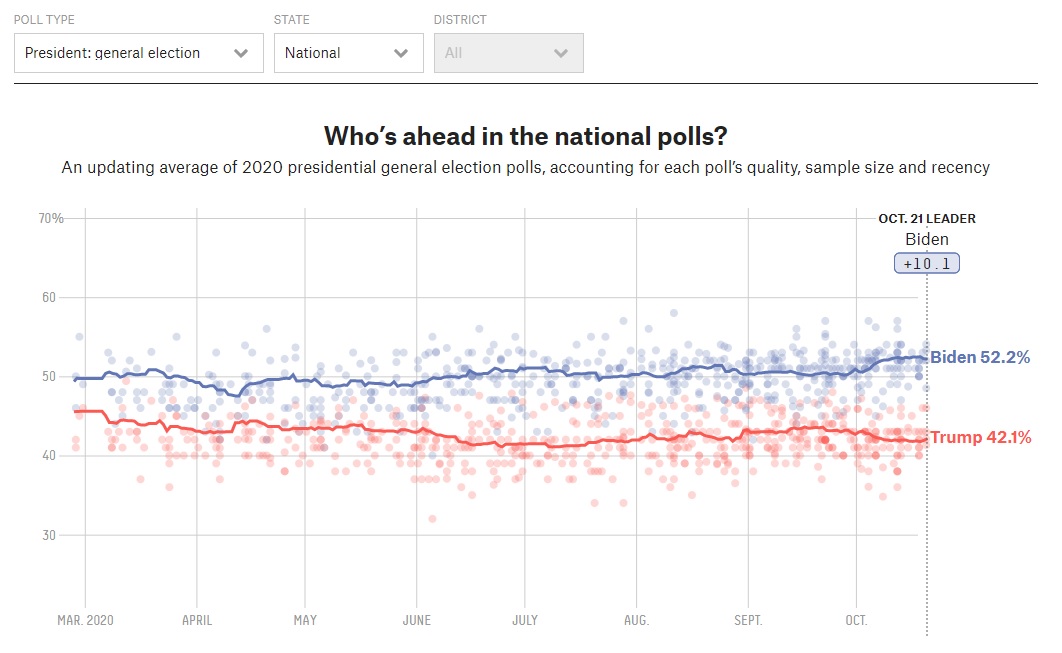 These differences don’t mean that one or the other should be dismissed out of hand. The more volatile RCP average can cause headaches with bad headlines and amplify the effects of outlier polls, but can also more quickly identify a potential trend than the more stable FiveThirtyEight average.

Both sites also track state polling, with RCP graphing the polling averages in six battleground states: Florida, Pennsylvania, Michigan, Wisconsin, North Carolina, and Arizona. In  those averages, Biden holds his largest lead in Michigan at more than 7 points, while his slimmest margin is in Florida, where he leads Trump by 1.6 points. 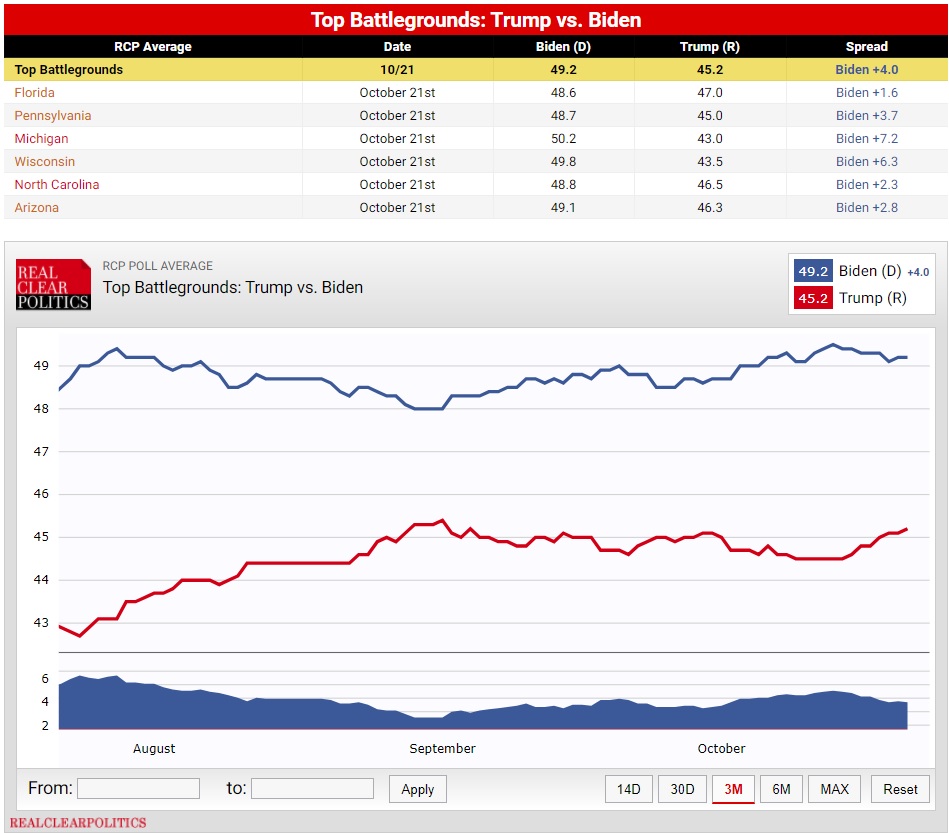 FiveThirtyEight, however, shows Biden leading Trump in Florida by three-and-a-half points. Their average includes a greater number of polls, and “corrects” for pollster rating, giving less weight to the “C-” Trafalgar Group poll that shows Trump leading Biden, for example.

In Michigan, the disparity is much smaller, with FiveThirtyEight putting Biden in the lead by 7.9 points.

But there are new battlegrounds this cycle, or at least Democrats hope so. In Georgia, RCP has Biden holding a 1.2 advantage over Trump, while FiveThirtyEight pegs it at just under a point at .8. Both averages show a slight narrowing trend over the past week.

In the Democratic pipe dream state of Texas, Trump holds a 4.4-point lead over Biden in RCP’s average, while FiveThirtyEight makes it a closer race at 1.3 points for Trump over Biden. The former shows a widening trend, while the latter shows a consistent seesaw battle at around that one point difference.

RCP tracks Senate race changes, and has just moved Minnesota from “Leans Dem” to “Tossup,” although Sen. Tina Smith leads GOP challenger Jason Lewis by 7.2 points in their state average. FiveThirtyEight still lists Minnesota as “Likely Democratic” and includes a new Civiqs poll that shows Smith up by 11 points. RCP’s forecast now shows Democrats with a shot at 54 seats, while FiveThirtyEight has them with a chance at landing on a 55-45 majority.

Check back with us daily for updates on the state of play going into what many agree is the most consequential election in generations.